I’ve recently made a handful of items for others, so thought I’d do a bit of a round-up…

First up is a review of the WARDROBE BY ME DRAPER POLO SHIRT that I’ve made for my hubby. I spotted this fabric on someone’s Instagram feed and knew he’d love it! It’s a jacquard jersey from Sister Mintaka.

We decided on the short sleeve version, with the polo collar and placket for which I used the reverse of the fabric. After checking the measurements we went for a size Small, which would’ve turned out too big, had I not checked and then increased the side seam allowances. (I slightly changed the order of sewing and sewed the sleeves in on the flat so that I could do this). Next time I’ll make an XS.

I found a few issues with the instructions on this make, mainly with the placket and collar, despite having made many shirts with collars and other items with plackets previously.

I got stuck on step 7 – annoyingly, the line drawing only shows the first bit, but not the rest!  I’d sewn the facing to the front, but couldn’t work out where to trim the seam allowance. Then on the next stage – Fold the placket RSF – I wasn’t sure where/how to fold it. In the end I got some help from the lovely folk on The Fold Line Group Facebook page and sussed it out… you have to cut a notch out of the seam allowance of the facing, and you have to fold the placket back on itself, sew, then cut a notch in that too, so that those two pieces sit neatly when you fold them the right way out…

I’m still not sure I’ve got it exactly right, as the facing sticks out a bit from behind the placket, but I *think* that’s from cutting a V in the bottom of the opening (as per the instructions) which has caused it to offset.

The next bit I found unhelpful was in the collar instructions, where it says “The collar piece is a bit bigger than the neckline.” How much is a bit?! I’d rather know exactly how much bigger the collar is supposed to be, so that I can sew it in the correct place. As it is, the collar turned out a bit bigger one side than the other because of how it’s attached, and it’s not sitting perfectly even on the placket.

Finally, the hem – I sewed it with the notches at the sides, as is traditional with polo shirts, but when hubby tried it on we both decided it was too long on him (he’s average height), so he suggested I trim it down and add a contrast hem band, which actually finishes it off really nicely and adds to the retro look of it. 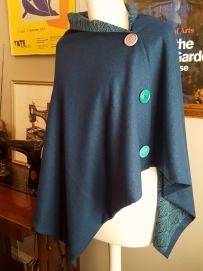 Next up is a COOL CRAFTING SKYE WRAP that I made for my lovely friend Nicki after she saw the one I’d made myself with some left-over boiled wool from Fabworks, Seasalt needlecord, and gorgeous Murano Glass Buttons.

This make doesn’t have any pattern pieces, just instructions and measurements (it takes just 1m of each fabric) and it’s lovely to use a contrasting lining. Nicki decided on a stunning quality Avoca Herringbone Donegal Tweed and Plaid Brushed Cotton for the lining, both from Fabworks. We looked at LOADS of different buttons – no mean feat considering we live nearly 200 miles away from each other! –  and then decided on HUGE cover buttons in fabric to match the lining… and they look FABULOUS (even if I do say so myself!)

A couple of months ago, my mum spotted a lovely tunic in Seasalt, but couldn’t justify the price, so I offered to make her one in some of their fabulous needlecord fabric instead! (We got 2 x 1m pieces, as they’re on offer Buy One Get One Half Price!) We went for the CLOSET CASE PATTERNS KALLE TUNIC SHIRTS with long sleeves, a band collar, box pleat, and popover placket. I made her a straight size 4, based on the size charts and some research into others’ makes and the fit has turned out perfectly.

We had a trip to our local haberdashery to choose the buttons, and of course had to then go for tea and cake to celebrate such a perfect match!

It’s quite an in-depth make, due to the front placket and smaller sleeve plackets, but that makes it all the more satisfying and the sew-alongs on the Closet Case website are really helpful. As well as the plackets, there are some lovely details in this pattern, such as the yoke and box pleat at the back, and the lovely curved hem. Without any further ramblings, here are some photos… I think you can tell she’s pretty pleased with it!

Finally, here’s the BACKSTITCH LIESL & CO METRO T-SHIRT I’ve made twice for my hubby. The first one was a short sleeve version with stripe jersey from Fabworks and the second is the long-sleeve with Ditto fabric’s Denim and Ochre Hourglass Jersey. (<< That link takes you to a slightly different colourway, which, incidentally, I’ve made a midi Kielo Wrap Dress with!)

Being  rather slim, it’s quite difficult for him to find a nice-fitting tee, but this does the job perfectly. It’s a really straightforward pattern and the size chart is spot on – I made him a size XS.

He only had a meter of each fabric, so the short-sleeve one fitted easily, but I had to cut the long-sleeve one across the grain to get it all in, but the fabric’s such fabulous quality that it didn’t matter, and it’s turned out perfectly.

I really enjoy sewing clothes for other people, although it can be a bit challenging compared to sewing for yourself when you can simply try something on at each stage, but the smiles on people’s faces when they wear something you’ve made can’t be beaten!

In other news, I’ve made a couple of other things for myself recently too – have a look on my Instagram feed – including my rather lovely Sew Over It Ultimate Culottes (with pockets!) made with Worsted wool, which’ve just won Sew Over It Show Off for October 🙂 !  I’m currently making ANOTHER Melilot Shirt Dress, this time with long sleeves, so I’ll share that over on Instagram in due course. 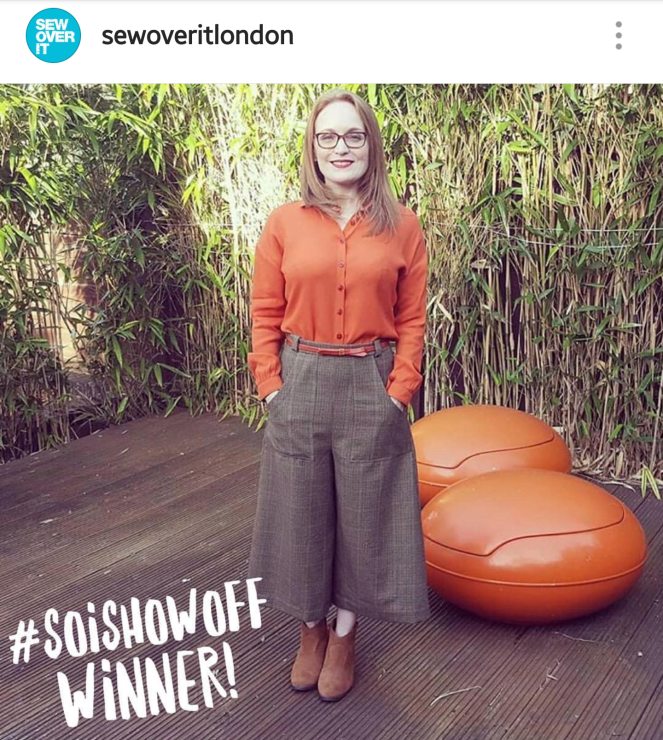 I own a gallery business with my artist husband in Wells-next-the-Sea on the beautiful North Norfolk Coast. I’ve always loved great design and use of colour and pattern (particularly mid-century themes), but I’d never had any interest whatsoever in sewing, until I happened to watch the The Great British Sewing Bee in 2014 and found myself thinking ‘I fancy doing that!’. So the following February, I had three lessons locally and made not one, but two skirts; I couldn’t believe it! By that point I’d learned the basics of reading a pattern; cutting out; transferring markings; adding darts, a waist band, and lining; inserting a zip; adding a button and button hole; and hemming… and I was addicted! My sewing has gone from the basics through to more intermediate makes, in both woven and jersey fabrics, with adaptations to achieve a better fit than I can get on the high street. I couldn’t pick a favourite part of the process: I love it all, from matching a pattern to fabric (or vice versa), deciding the style, working out the fit, the actual sewing and problem-solving as I go along, and of course there’s nothing quite like that sense of achievement when you sew that final stitch. I still surprise myself every time I finish making something. I’ve sewn several patterns from the ‘big 4’, but, like the lovely SewNeedy, my favourite patterns are from Sew Over It. I love their style and the reliable instructions, plus they’re very good at tempting me with their glorious fabrics. PS My real name's Jo! My sewing name, Daphne, came about from my mannequin, who I named after my wonderful nannie. I learnt to sew after she'd passed away, which is quite sad as I know she would've been really proud of what I've achieved, so it's a nice reminder of her every time I make something and finish it off with a 'Daphne' label. xx View all posts by Daphne

2 thoughts on “Sewing for Others”